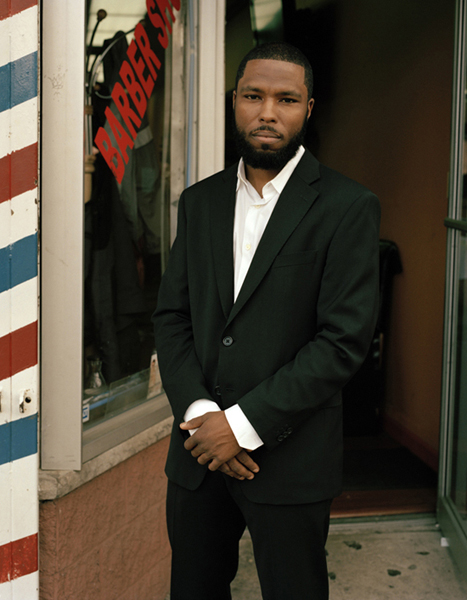 Tema Stauffer: Michael, May 2011, from the series Paterson

Our 2012 $3000.00 WIP-LTI/Lightside Individual Project Grant has been awarded to Tema Stauffer for her project Paterson.

Paterson is a documentary series of street portraits depicting residents of Paterson, New Jersey during the years following the economic crisis in 2008. Paterson is a historic city near the Great Falls of the Passaic River, once prosperous from its mills and silk manufacturing industry. Founded in 1791 by Alexander Hamilton and others and envisioned as the nation’s first planned industrial city, Paterson offered jobs and opportunity to an immigrant labor force in the 19th and early 20th centuries, and it was a stop on the Underground Railroad. The city is the setting of two John Updike novels and one by Junot Diaz, and has inspired the poetry of William Carlos Williams and Allen Ginsberg, as well as the architectural photography of George Tice. The third largest city in New Jersey, Paterson began to decline economically during the 1960s and 70s, and has continued to face high rates of unemployment since the recession. Downtown Paterson is lined with dollar stores, barbershops, beauty salons, bakeries, bars, churches, temples, and clinics for addicts in recovery. While its downtown streets are bustling, these streets are also a place of visible struggle and desperation.

The portraits focus on the self-expression of working-class and economically marginalized Americans of the diverse racial and ethnic groups comprising Paterson’s population. Shot in natural light on the streets with a medium-format camera, each image explores the psychology of an individual who reveals him or herself willingly to the camera’s gaze. The minimal backgrounds suggest the urban environments these subjects occupy; however, these straightforward, realist, and classically composed photographs concentrate on faces and the depth of human experience that is spoken through them.

The medium of photography has historically – and notably through seminal work made during the Great Depression – represented Americans struggling with economic hardship and alienation, and it is this socially engaged and humanistic tradition that has deeply influenced the creation of this work. The portraits of the residents of Paterson contribute to a contemporary dialogue about the current economic reality and the experiences of Americans who exist on our ever-widening margins. 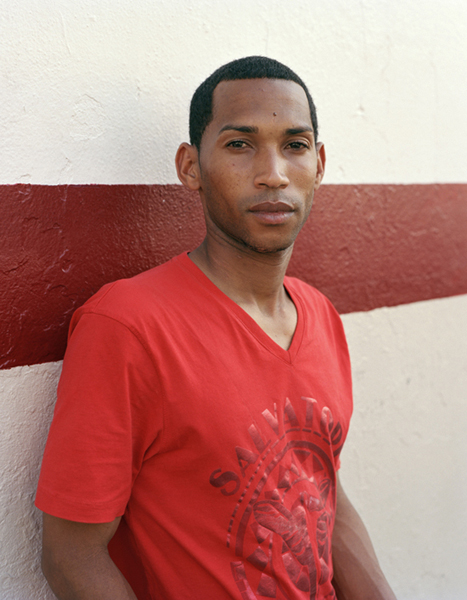 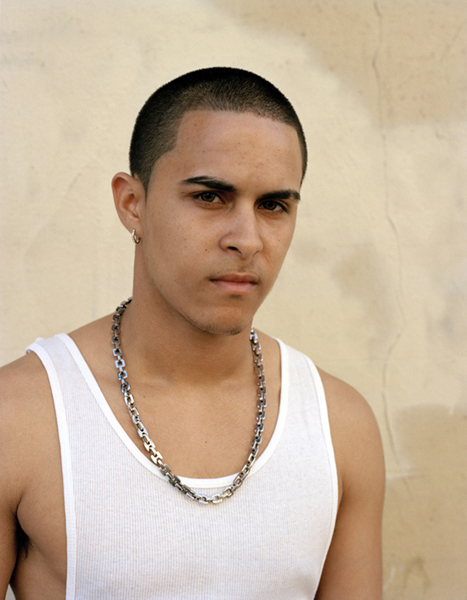 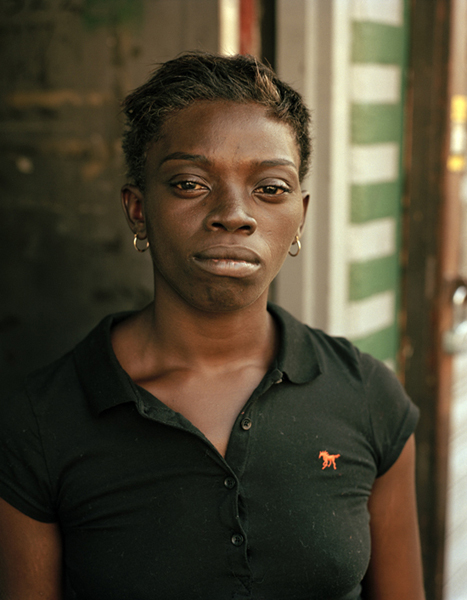 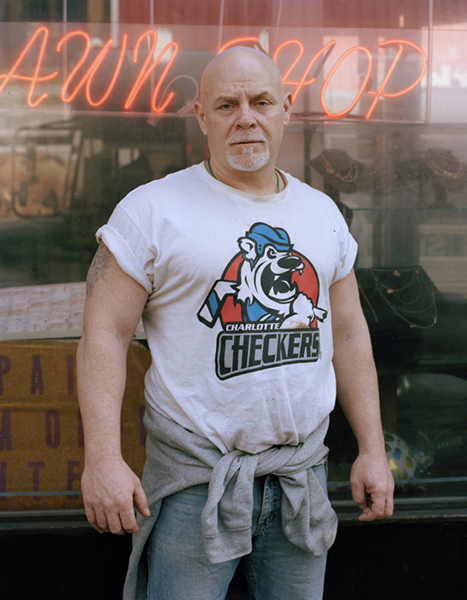 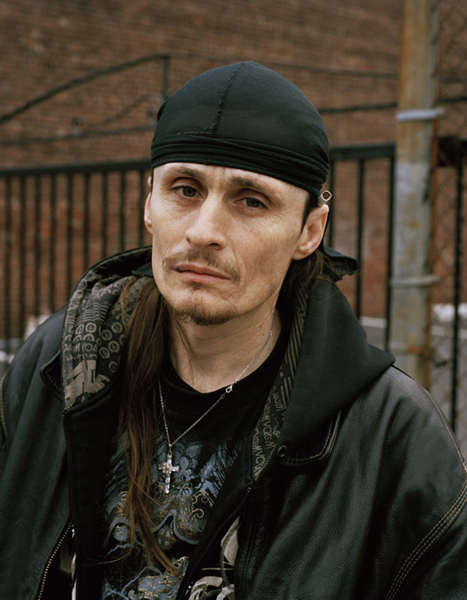 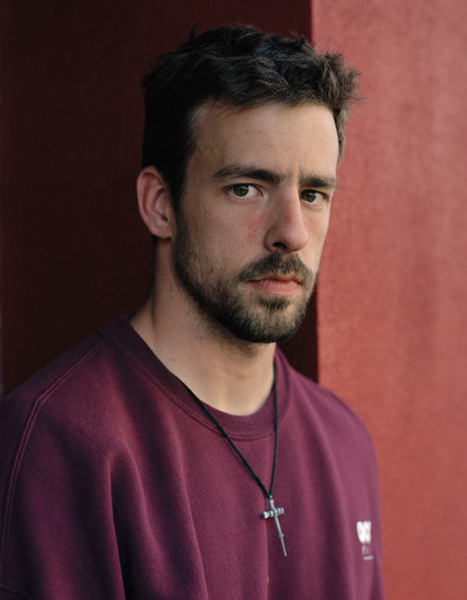 Tema Stauffer is a photographer based in Brooklyn. Her work has been exhibited at Jen Bekman Gallery and Daniel Cooney Fine Art Gallery in New York, as well as galleries and institutions nationally and internationally, included a survey of Contemporary U.S. Photography at the Houston Fotofest 2010 Biennial. She teaches at the School at ICP, Ramapo College, and the College of Staten Island, and she has taught art courses at William Paterson University and a photography workshop at Toxico Cultura in Mexico City. She is also a curator and writer for Culturehall, an online resource for contemporary art, and she was awarded an AOL 25 for 25 Grant for innovation in the arts in 2010.

She received Third Prize in The Photo Review Competition 2012, and was chosen as a finalist for the Outwin Boochever Portrait Competition 2013. Her work will be included in the competition exhibition at the Smithsonian’s National Portrait Gallery from March 2013 through February 2014.

Stauffer graduated from Oberlin College in 1995 and received a Master’s Degree in Photography from The University of Illinois at Chicago in 1998.  She received CAAP grants for projects in 1999 and 2000 and also contributed a series of photographs shot on ride-alongs with police officers to the CITY2000, an archive of photographs examining the city of Chicago in the year 2000. A large body of her work was exhibited through The Minnesota Center for Photography at The Katherine E. Nash Gallery and in a solo exhibition at The Rochester Art Center in 2004. She was a finalist for the McKnight Photography Fellowship in 2005 and was nominated for the KLM Paul Huf Award in 2008.

She has participated in seven group shows at Jen Bekman Gallery, and her solo show, “American Stills,” opened in October 2004. Fifteen images from this body of work were selected by The Museum of Contemporary Photography at Columbia College in Chicago for the Midwest Photographers Project. She exhibited her portrait series, “The Ballad of Sad Young Men,” along with work by Francesca Romeo at Daniel Cooney Fine Art Gallery in 2009.

Stauffer’s work has been in The New York Times, The Chicago Reader, The City Pages, The Rake Magazine, Lavender Magazine, The Village Voice, and W Magazine.  She has contributed to online publications including Ausgang, A Field Guide to the North American Family, and Humble Arts Foundation’s Group Show.  Her work was also published in the Fotofest 2010 Contemporary U.S. Photography Catalogue along with a curatorial essay by Aaron Schuman, “Whatever Was Splendid: New American Photographs.”