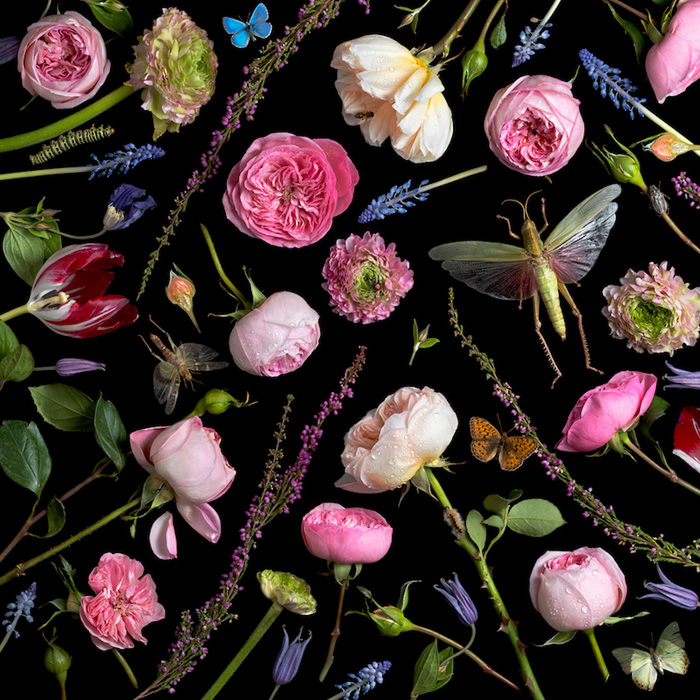 The following text is from the Robert Klein Gallery press release:

A regular visitor to New York City’s flower and farmers markets, Tavormina looks for “perfectly imperfect” plants to set the scene. But she does not limit herself to items on sale; she has found butterflies on the sidewalk and picked lilies of the valley through wrought iron fences. Florence Fabricant of THE NEW YORK TIMES called Tavormina’s still lifes “arresting.” Vince Aletti of THE NEW YORKER writes of the work: “[f]ruits, vegetables, and flowers spill from their containers in an almost obscene display of abundance. Everything seems poised between voluptuousness and rot, at once gorgeous and doomed.”

Botanicals, a series Tavormina started in 2013, takes a traditional genre and flips it on its head. At first glance, the images appear to be deconstructed still lifes from her earlier series Natura Morta and Flowers, Fish & Fantasies. But where she once directed the viewer’s eye, Tavormina is now dispersing with a central focus and playfully pulling our attention to the edges of the image.

“These are all my favorite flowers, in all stages of life,” says Tavormina. “They represent my childhood, my memories.” In her quiet, beautiful way, she reminds us that winter’s root vegetables and summer’s roses can flourish side-by-side, that the seasons have given way to age and time.

LTI-Lightside has been working with Tavomina since 2009. Her work has been exhibited in New York, Miami, Chicago, Los Angeles, London, Paris, and Moscow among other venues. For more of Paulette’s work, please visit her website here