The Ballad Live
An evening of art and entertainment featuring Nan Goldin
October 26, 2015

On Monday, October 26th, Aperture Foundation celebrated the thirteenth anniversary of the publication of Nan Goldin’s The Ballad of Sexual Dependency, a milestone work by anyone’s standards. By now, the reach of Goldin’s Ballad is incalculable and certainly no one can argue how fitting it is for Aperture to give it (and themselves) the nod for it’s influence after all these years.

This is our third year in a row contributing to the Foundation’s Fall Benefit, the largest and most elaborate event on their annual calendar. We produced over 50 prints for the Ballad’s silent auction, now working within a well established protocol. We’re fortunate to have the generous support of Hahnemühle to thank for their spectacular Photo Silk Baryta material for the second year in a row. 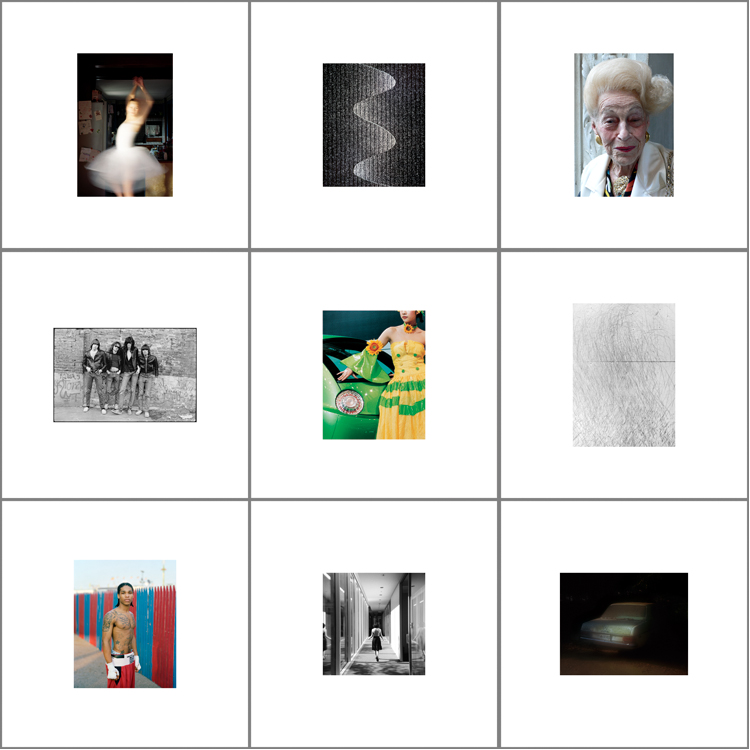 It’s been an ongoing privilege to be exposed to the wide array of artists and photographers associated with Aperture. Over the past years we’ve repeatedly handled submissions from a diverse group including (but not limited to) Penelope Umbrico, Zoe Crosher, Todd Hido, Amy Elkins, Richard Renaldi, Olivia Bee, Jen Davis … and honestly, far too many others to list here. More than a few have become regular clients of LTI/Lightside and we’re immensely grateful to Aperture for the opportunities presented to us via this terrific collaboration. 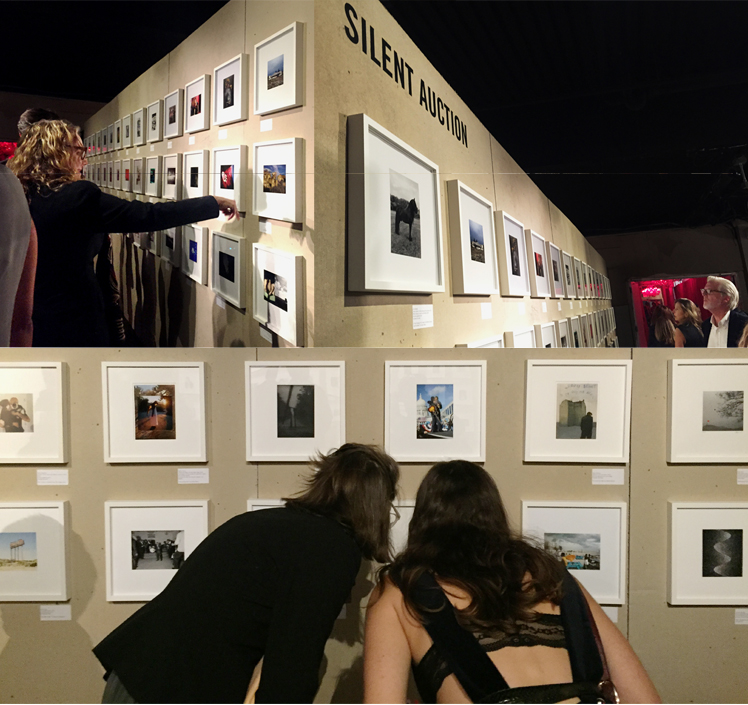 Like last year’s event (The Open Road), The Ballad also featured brilliant musical performances. Once the big doners finished doing their thing, which, included duking it out over offerings from Richard Moss, Katherine Opie, Stephen Shore and of course, Nan Goldin herself (!) … the stage at Terminal 5 was rightly relinquished back to the likes of Laurie Anderson and the Bush Tetras … I mean seriously, way to go Aperture! 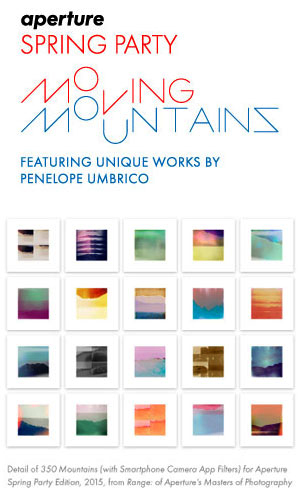 Aperture Foundation held a Spring Fundraiser — the first annual, they said (though later it was determined that Spring Fundraisers may have occurred in the past). Anyway, this one was centered around a Penelope Umbrico project called Moving Mountains, which, is likely best explained in her words:

Mountains, Moving, 2012 – ongoing, considers an analog history of photography within the digital torrent that is its current technological manifestation. I steady my focus on the mountain: oldest subject, stable object, singular, immovable landmark, site of orientation, place of spiritual contemplation. I employ smartphone camera apps to make new photographs of the images of mountains that appear in canonical master photographs. I find them everywhere: in books, magazines, advertisements, online. Pointing my iPhone down at these mountains, the hallucinogenic colors of the camera app filters blend with the disorienting effects of the iPhone’s gravity sensor. Photo grain, dot-screen, pixel, and screen resolution collide, often performing undulating moirés. My mountains are unstable, mobile, have no gravity, change with each iteration, remastered. Here is the biggest distance, the longest range. I present a dialogue between distance and proximity, limited and unlimited, the singular and the multiple, the fixed and the moving, the master and the copy. I propose an inverse correlation between the number of photographs that exist of mountains at any one time, and the stability of photography at that time.

What she didn’t say was that there were 350 pieces in this project (and we printed ALL of them for a one-night event!). It was easy though … Penelope is super-together and terrific to work with. 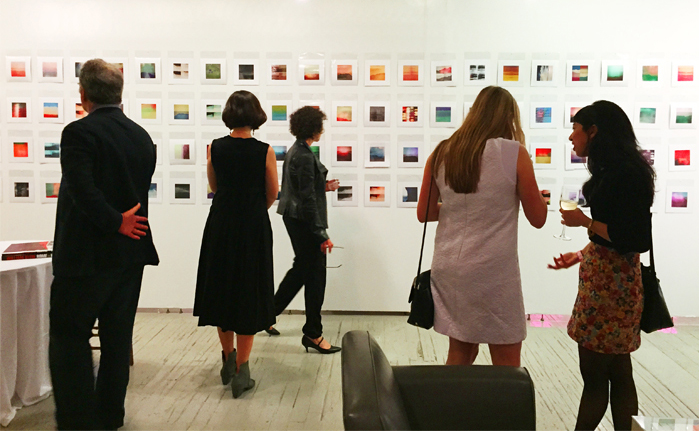 As usual, it was a booming fun party with lots of people and food and music … and an open bar that didn’t seem to disappoint anyone involved. 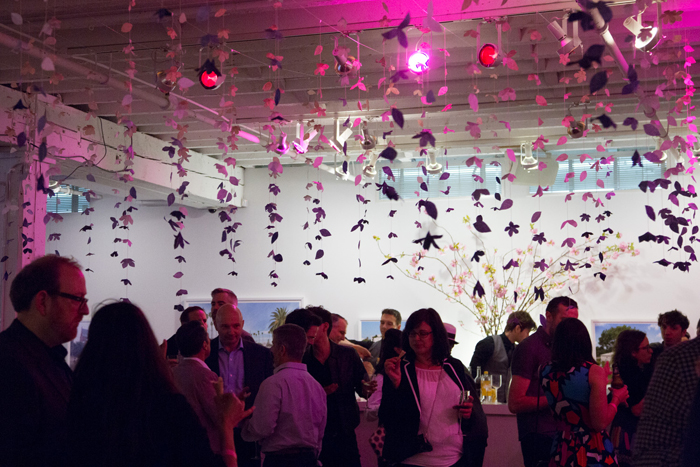 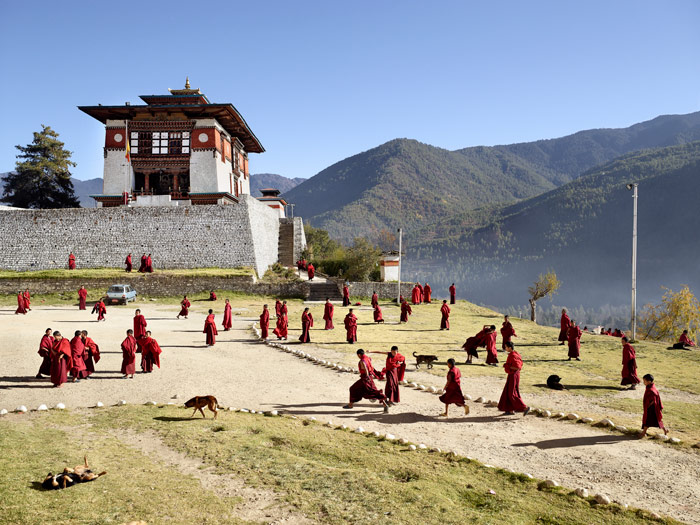 Back in December 2014, Kellie McLaughlin from Aperture Foundation approached us to print an exhibition for James Mollison’s project, Playground.  Aperture and Mollison had been working on the book and the exhibition was to be timed with its release for Spring 2015. We weren’t familiar with James’ work, though Chris Boot (Aperture’s Director) had published a number of his projects over the years before coming to Aperture. So obviously, we had not met him at this point — and as it would turn out — we wouldn’t meet him until the opening night of his show!

This could be considered a somewhat unusual approach — or at the very least, maybe not ideal circumstances for producing a 30 (+) print exhibition of works for the first time, with a new customer! But James lives in Italy and wasn’t in a position to travel for proofing and well, sometimes these things just happen this way …

The solution turned out to be fairly straightforward: we would simply use FedEx to shuttle a series of tests and proofing rounds between Italy and New York. It was certainly easy enough for us to produce a set of full frame proofs and an additional set of “at-size” sections of each image. This enabled James to review all of his on-screen post-shoot work in physical form and lay out the entire exhibition to get a feel for the balance of color and density. The at-size sections were particularly useful in allowing him to examine the minute details of each complex interaction — a hallmark of this project — and rest assured that everything was falling into place as intended. 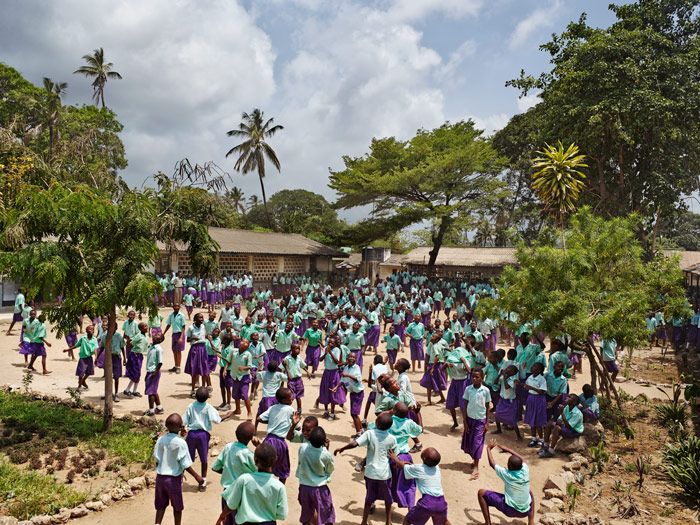 From the Aperture Press Release:

Mollison’s photo projects are defined by smart, original concepts applied to serious social and environmental themes. For Playground, Mollison photographed children at play in their school playgrounds, inspired by memories of his own childhood and interested in how we all learn to negotiate relationships and our place in the world through play.

Various scenes of laughter, tears, and games demonstrate the intense experiences which happen in the playground. For each picture, Mollison sets up his camera during school break time, making multiple frames and then composing each final photograph from several scenes, in which he finds revealing “play” narratives.

With photographs from rich and poor schools, numerous middle schools, and some high schools, in countries including Argentina, Bhutan, Bolivia, India, Israel, Italy, Japan, Kenya, Nepal, Norway, Sierra Leone, the United Kingdom, and the U.S., Mollison also provides access for readers of all ages to issues of global diversity and inequality. 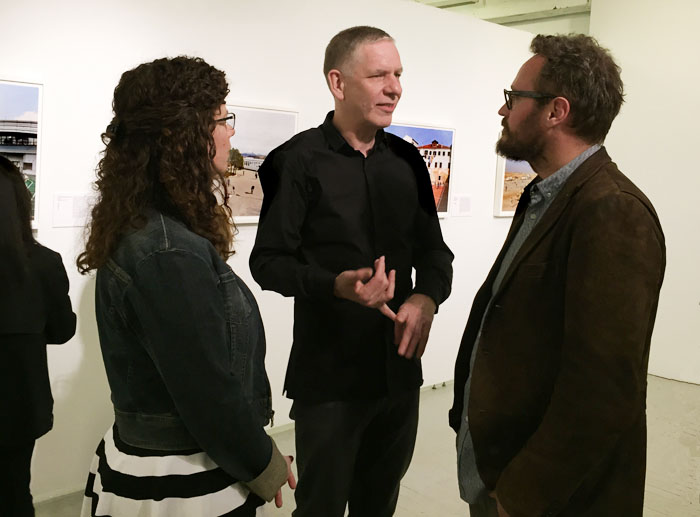 Aperture’s Chris Boot (center) counting down the ways he is so pleased with James Mollison’s (right) work.

James Mollison’s (born in Kenya, 1973) work has been featured widely in such publications as Colors, the New York Times Magazine, and the Paris Review, among many others. He has also published several books, among them James and Other Apes (2004), The Disciples (2008), and Where Children Sleep (2010).

You can see more of James’ work on his website by clicking here. 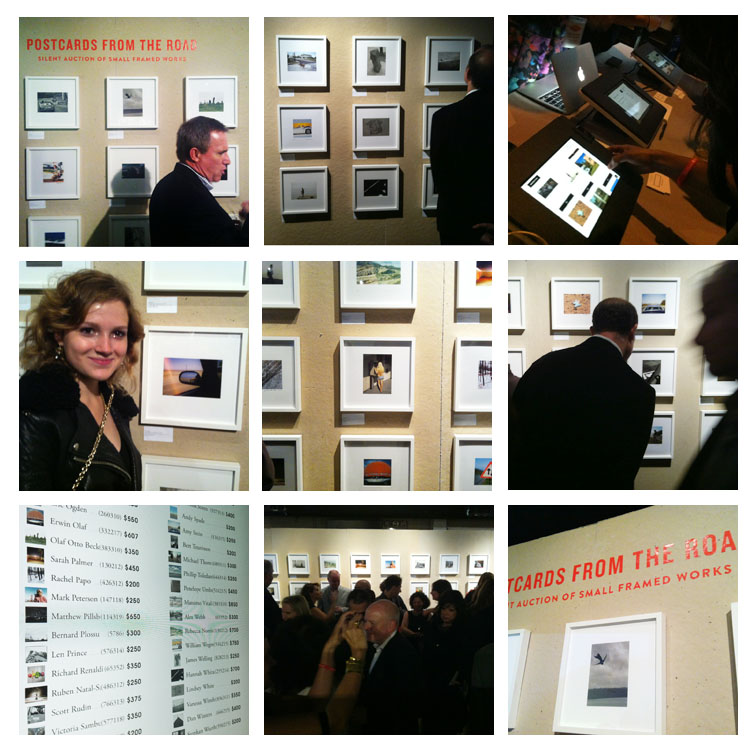 As you can see — the silent auction pieces were clustered together in a tight space that saw upwards of 800 people pass through over the course of the evening! A big thanks goes directly to Carol Boss of Hahnemuhle USA for generously contributing the necessary rolls of their wonderful Photo Silk Baryta 310 paper.

There was live auction for various prints as well, the sales of which took place during a sit down dinner that included a number of  laudatory speeches aimed at Robert Frank (the honoree of the night). Then there was a bit showmanship from Alex Soth and Billy Bragg before the evening essentially evolved (devolved?) into a rock show headlined by The Kills. 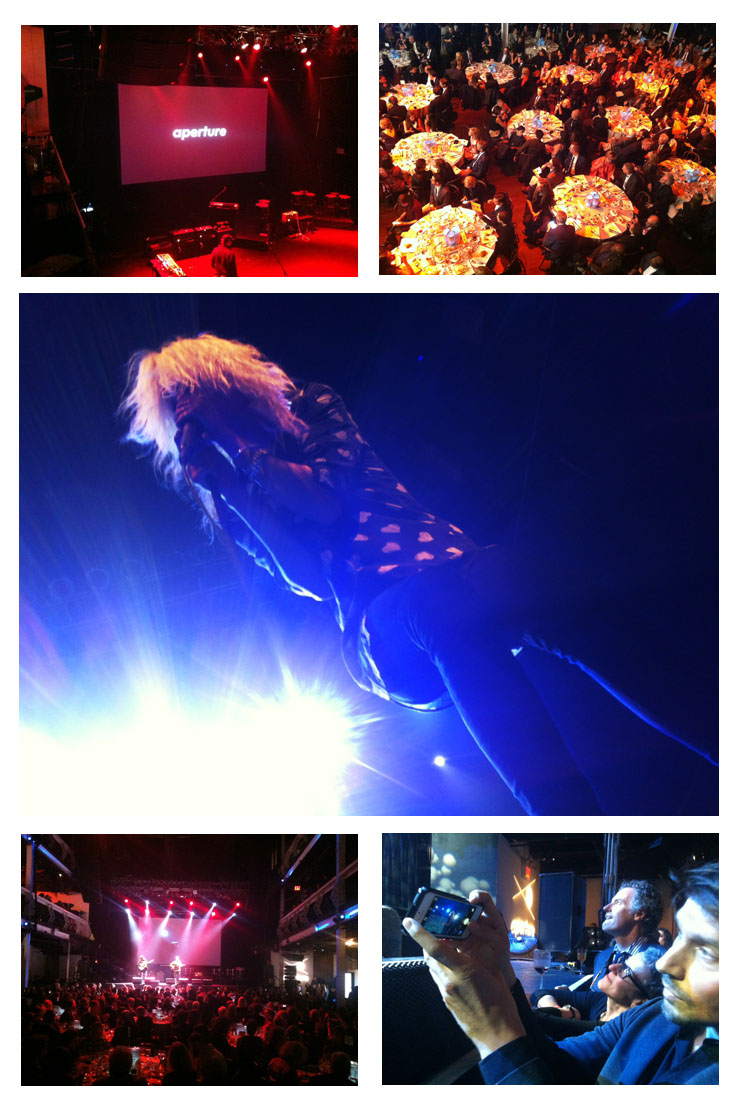 And that, is how you throw a fabulous New York City style benefit event! 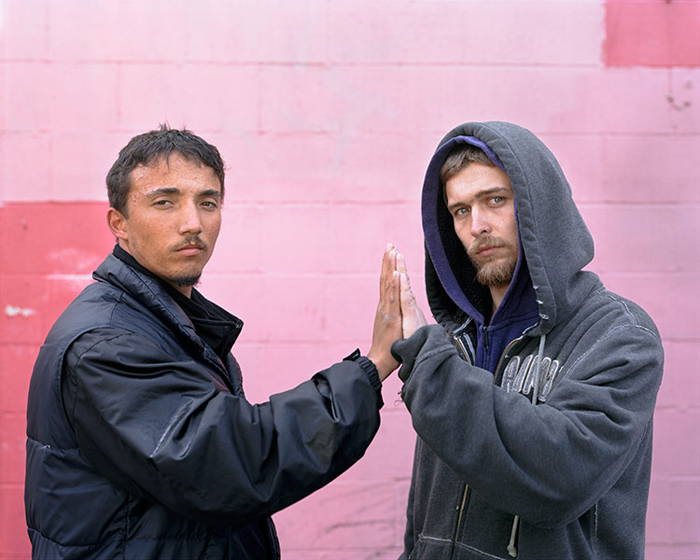 From the Aperture Press release:

Since 2007, Richard Renaldi has been working on a series of photographs that involve approaching and asking complete strangers to physically interact while posing together for a portrait. Working on the street with a large format 8-by-10-inch view camera, Renaldi encounters the subjects for his photographs in towns and cities all over the United States. He pairs them up and invites them to pose together, intimately, in ways that people are usually taught to reserve for their close friends and loved ones.

Renaldi creates spontaneous and fleeting relationships between strangers for the camera, often pushing his subjects beyond their comfort levels. These relationships may only last for the moment the shutter is released, but the resulting photographs are moving and provocative, and raise profound questions about the possibilities for positive human connection in a diverse society.

This exhibition coincides with the launch of Renaldi’s book Touching Strangers and includes thirty-five photographs from the series, curated by Ann Pallesen, director of Photographic Center Northwest, Seattle (where the exhibition will tour following its presentation at Aperture Gallery). 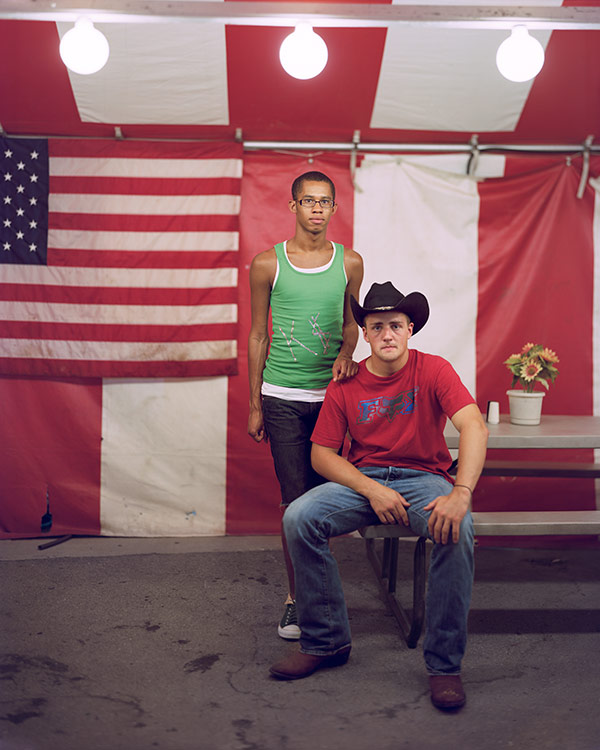 This LTI-Lightside’s first exhibition with Richard though we’ve been working with him for years. We’ve processed his 8 x 10 color negative and black & white film from a multitude of projects going further back than even Fall River Boys. And, of course, we’ve made prints here and there along the way … it’s always been a pleasure seeing Richard’s projects evolve and we’re flattered to have been invited to be an integral part of the working process of Touching Strangers.

Richard Renaldi (born in Chicago, 1968) graduated from New York University with a BFA in photography in 1990. He has presented solo exhibitions both in the United States and abroad, including at Fotografins Hus, Stockholm; Robert Morat Galerie, Hamburg, Germany; and Yossi Milo Gallery, New York. Renaldi’s work has also appeared in group exhibitions, including Strangers: The First ICP Triennial of Photography and Video at the International Center of Photography, New York (2003). Touching Strangers is Renaldi’s third book, following Figure and Ground (Aperture, 2006), and Fall River Boys (2009).

On Monday, October 28th, 2013, over 500 guests in the worlds of photography, art, fashion, media, and music gathered for the Aperture 1/1 Benefit and Auction, a one-of-a-kind party in support of Aperture Foundation’s education and visual-literacy programming. Headlining the event was Albert Hammond, Jr. performing songs from his new EP, AHJ. Other special guests included Henry Wolfe and Phil Carluzzo who performed an original score to Manhatta, the 1921 short film by Paul Strand and Charles Sheeler.

Aperture asked us to contribute the printing for Kathy Ryan’s curated Instagram Auction and we thought, sure, why not (?) So… eighty-nine, yes you read that right, (89) 12″ x 12″ archival pigment prints later, we finally found ourselves at a pretty cool party …

Moveable Feast: Fresh Produce and the NYC Green Cart Program
Museum of the City of New York
Mar 22 through Jul 10, 2011 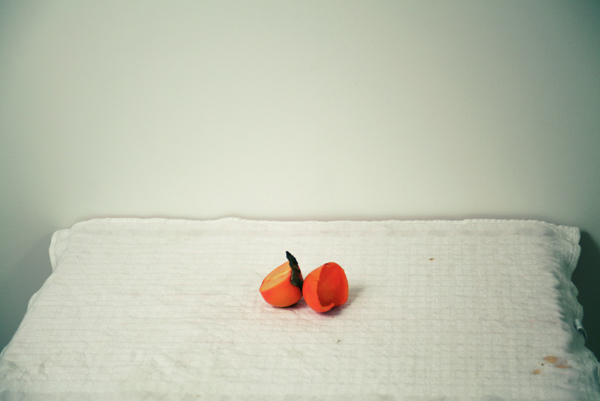 The exhibition features new photographs by LaToya Ruby Frazier, Thomas Holton, Gabriele Stabile, Will Steacy, and Shen Wei, who were commissioned by the Aperture Foundation to chronicle the initiative over the course of a year.

The resulting photographs, in styles ranging from portraiture to landscape to street photography, capture not only the carts themselves, but also the stories of the vendors, customers, and their communities.
Moveable Feast invites consideration about the geography of food options and its relationship to a community’s health.

LTI-Lightside worked with Aperture Foundation to produce prints for  Gabriel Stabile, LaToya Ruby Frazier and Shen Wei for this exhibition. 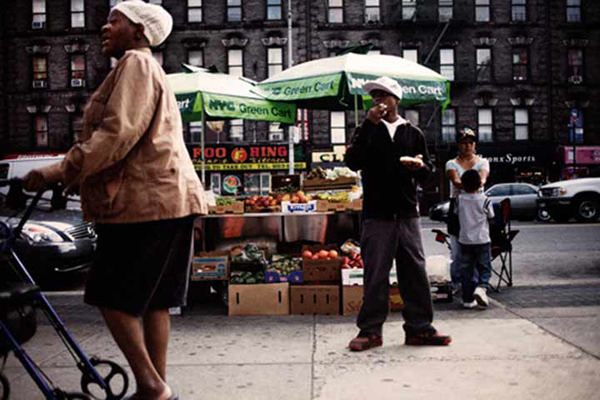 Justine Kurland’s This Train is Bound for Glory has been well reviewed in The New Yorker, New York, Time Out: New York, and beyond … much of the writing touches on just how much of Kurland there is in these photographs. Many of the descriptions of nomads adrift in the American West – and of the landscape itself as a metaphor for the wanderlust of the American spirit – reflect Kurland’s personal energy, which is smartly on display for just another week.

Barbara Crane is enjoying a great deal of attention this year. The Chicago Cultural Center has launched a six decade retrospect of her work, Barbara Crane: Challenging Vision and Aperture has published a beautiful volume of Private Views.

LTI / lightside worked with Aperture to produce a limited edition of twenty 8 x 10 Fujiflex digital-c prints from a special edit of Private Views curated specifically for the Aperture Gallery.